Dear Brothers and Sisters in Christ,

As we quickly approach the end of Great Lent and begin to turn our thoughts and prayers toward The Saturday of Lazarus, Palm Sunday, Holy Week and Pascha, I want to call attention to something, that quite honestly…has caught your attention.

Since the beginning of Great Lent, I have worn the traditional kalimafkion, or Orthodox clerical hat. Some priests wear them all the time. Some would never imagine placing it on their head. Some appreciate them. Some do not.

There was a time in the history of our Archdiocese, when priests were not permitted to wear “the ole stovepipe.” Assimilating into American and western traditions was the desire of our church leaders. Priests who would come here from Greece, in the early days of our experience, were given money for a haircut, a clean shave and a black suit.

In most recent times, traditional garb from Orthodox Motherlands have found their way back into this country. Some priests wear cassocks or robes, while other Orthodox clergymen choose to wear western collars. Incidentally, you have seen me, comfortably wearing both – at any and all times. I do not look negatively upon any of these traditions, for they are all part of Orthodoxy in America.

Years ago, His Eminence Metropolitan Isaiah of Denver released an Encyclical that stated he has no preference for how priests of his Metropolis choose to dress (collar and suit or cassock and hat) as long as we never look down upon our brother priests who dress differently than ourselves.

As always, wise and paternal advice from His Eminence.

Since I have been asked a few times now, why I am “suddenly” wearing the hat during services, I want to explain. Indeed, you don’t see me wearing the kalimafkion often. But you have seen it before. I wore it last year as well – only during Lent and Holy Week. Just like this year.

The entire demeanor of the Church changes during the Fast. The sanctuary is darkened. The music has a somber tone. The altar and the priest are vested in dark purples and muted hues.

The reason a priest wears a clerical hat, at any time of the year, is out of humility before the Lord and as a symbol of spiritual discipline. I choose at this time, to heighten these principles within myself, and to illustrate them to the parish.

For me, and I learned this from my Spiritual Father, the covering of my head during the divine services of Lent allows me to focus more clearly upon the themes, lessons, readings, and messages of these precious days. It is a penitential act. It is a pious (not pietistic) act of humility. It is something different, that helps define something…different.

Great Lent is different than the rest of the year.

Holy Week is different than even the days of Lent.

Pascha is more different, still, than anything else that’s been described.

So, when the Resurrection arrives, the hat gets put away for another year.

Please do not misunderstand, I don’t hang up spiritual discipline with the kalimafkion. My feeble attempts at true humility and pious practice don’t get put in a box until next spring (though regrettably, my actions speak otherwise), I just appreciate a heightened awareness during Lent. And the “silly hat” helps me accomplish this.

The days of the Lenten Fast are near completion. There is only one more, short week until the transitional days of the Saturday of Lazarus and Palm Sunday. Please, in way that you may feel is beneficial to your struggle, to your ascetic practice, to your pious discipline, engage yourself in the Good Fight and make the most of what’s left. It’ll be good for your soul.

With Much Love in Christ, 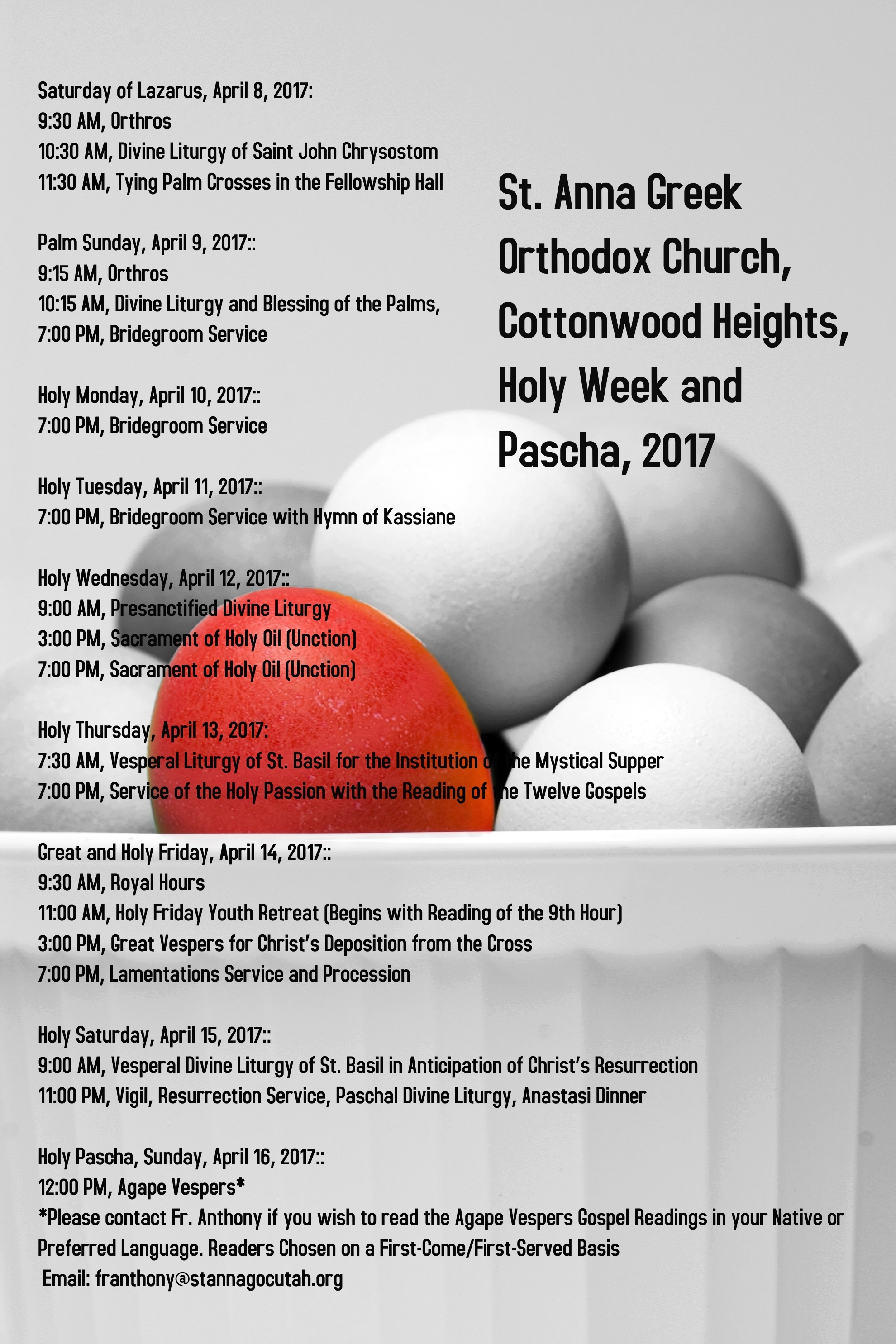 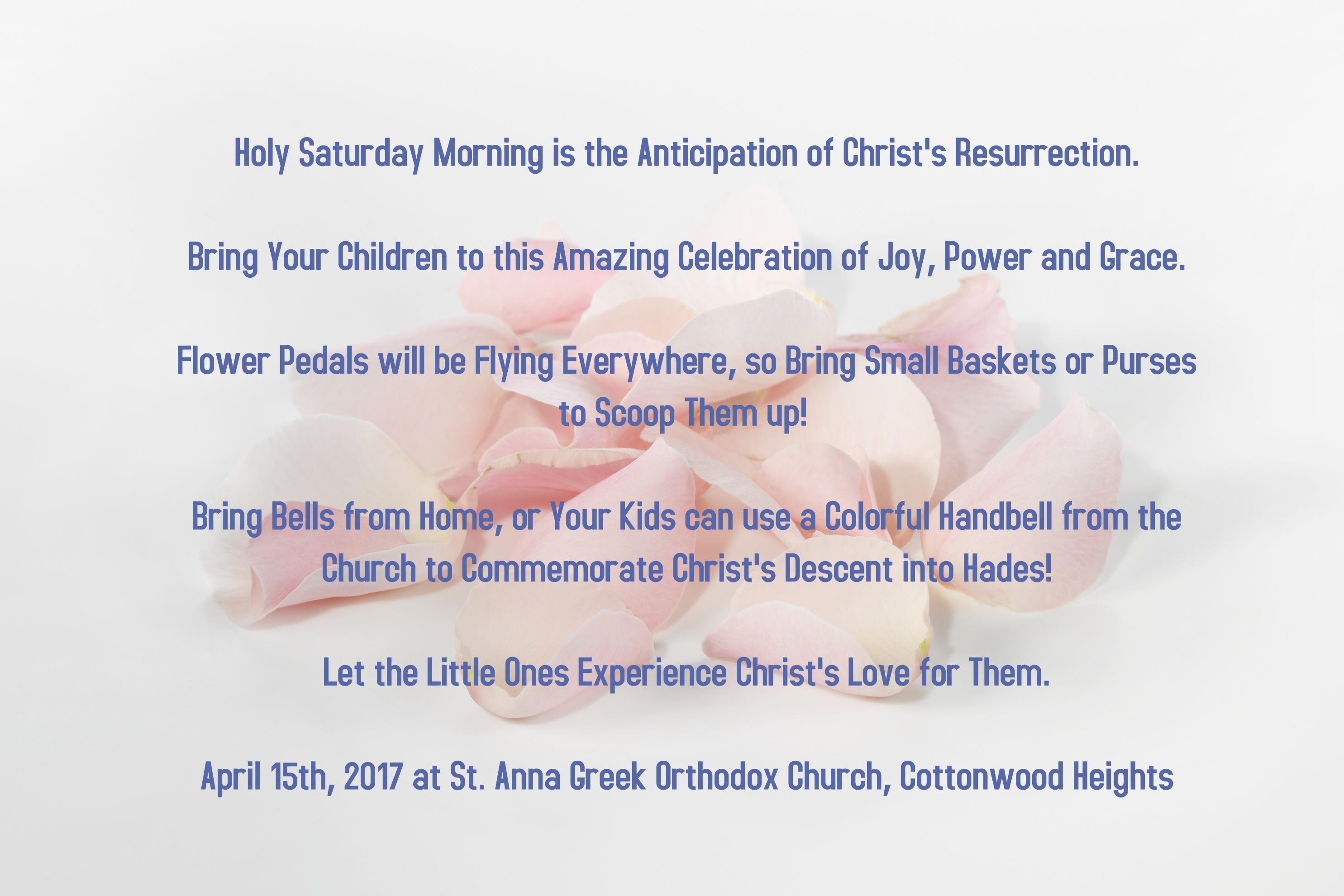 DEAR BROTHERS AND SISTERS IN CHRIST,

FRIDAY, MARCH 24th IS THE EVE OF THE ANNUNCIATION, ONE OF THE TWELVE MAJOR FEASTS OF THE CHURCH.
GREAT VESPERS FOR THE FEAST AND THE 4TH STANZA OF THE AKATHIST HYMN BEGIN AT 7:00 PM.

COME VENERATE THE PARISH’S NEW ICON OF THE ANNUNCIATION.

THE INTRODUCTION TO OUR PARISH LENTEN RETREAT BEGINS, FOLLOWING SERVICES WITH A LIGHT MEAL.

WE WILL WELCOME DR. EVE TIBBS AS OUR RETREAT SPEAKER.

SATURDAY, MARCH 25th IS THE FEAST OF THE ANNUNCIATION.

DIVINE LITURGY BEGINS AT 10:30 AM.
A LENTEN LUNCHEON, HOSTED BY OUR WOMEN’S MINISTRY TEAM, AND OUR PARISH LENTEN RETREAT WILL BEGIN DIRECTLY FOLLOWING THE DIVINE LITURGY; CONCLUDING AT 3:00 PM.

“Now it happened as they journeyed on the road, that someone said to Him, ‘Lord, I will follow You wherever You go.’ And Jesus said to him, ‘Foxes have holes and birds of the air have nests, but the Son of Man has nowhere to lay His head.’ Then He said to another, ‘Follow Me’” – Luke 9:57-59

Dear Brothers and Sisters in Christ,

Though Jesus Christ is Word of God and the Author of all Creation, he basically spent His adult life as a homeless man. He travelled extensively from Galilee to Jerusalem, never having a permanent place to call his own. This was a witness of His commitment to remain close to His flock. For others, however, homelessness is not a divine choice, but rather a cruel circumstance.

The good people of St. Anna are embarking on a journey to help, in a very small way, make a dent in the struggle to provide shelter, protection and dignity. Several weeks ago, I appealed to you, looking to identity a chairman and trip leader for our mission trip to Project Mexico this Summer. Christopher Zambos is the person who has stepped up to this challenge. He has a few words to share with you all.

“Project Mexico is a wonderful chance to participate in the construction of a home for a family in need. This task will include a variety of different jobs and opportunities, such as mixing cement, sawing, driving nails, painting, meeting the recipient family, and playing with the neighborhood children. We will be housed in tents (tbd if we need to provide) at St. Innocent Orphanage where you will have the opportunity to meet the staff who work there and the boys who live there. The first night will be dinner in town. All other evenings will be spent together talking about the missionary experience and getting to know one another on the Orphanage. There will also be limited time for shopping.

We have 15 spots open for people who want to literally build a home for a family.

Each mission team member is responsible to raise approximately $800 – $1,000 for the trip.
(Watch for details about our Palm Sunday Pancake Breakfast Fundraiser!)

The home will be approximately 21’ X 11’ and will be completed in four days. Day 1 will be mixing, tamping and floating the concrete for the foundation. Day 2 will be building the walls and rafters. Day 3 will be wrapping the house in chicken wire, stucco, roofing, windows and doors. Day 4 will be the final touches and the blessing of the house. No construction experience is needed, just the ability to work hard and play hard.

We need 15 volunteers ages 15 and up who are willing to put in a little hard work and sacrifice. Everyone must have or get a Passport book or Passport Card to cross the border. St. Innocent Orphanage is located near Rosarito, Mexico, just south of Tijuana. This will be a very uplifting, spiritual, bonding and rewarding mission that will create memories that will last a lifetime.

We only have until April 30 to organize, coordinate, plan, fundraise and pay for this mission. We will depart early morning on Wednesday, August 16 and return in the evening on Tuesday, August 22. I will need a couple of adults to assist and chaperone the mission. Please contact Christopher Zambos (801-913-5916, zambosfamily@comcast.net) or Fr Anthony if you would like to volunteer or have further questions.”

Please consider participation in this worthy project. If you are physically able to travel to Mexico, pour concrete, swing a hammer, work in the sun, and desire to change the destiny of a family, please join this group. If, for any reason, you are unable to come on the trip, especially for health reasons, please strongly consider a monetary donation that will help get someone there in your stead.

As we continue to move ever closer to the Passion, Crucifixion and glory that is Christ Jesus, I pray that the discomforts our Lord experienced in this world will not be experienced by families living in poverty which cannot provide adequate housing for their children. He had no place to lay His head, so He commands us to provide the place where a child may do just that.

With Much Love in XC,

Please pray for our GOYANS while they are away on their Lenten Retreat!

Please welcome Fr. Ambrose back to St. Anna’s as he is gracious enough to celebrate the Sunday services while I’m with the kids.
Fr. Ambrose will be with us on Friday Evening for the Salutations to the Theotokos.

After Divine Liturgy, a fellowship hour is held. Participants in Sunday school are dismissed to go to class after Holy Communion.

After Divine Liturgy, a fellowship hour is held. Participants in Sunday school are dismissed to go to class after Holy Communion.